As COVID-19 rages through the world with devastating consequences, scientists and doctors are attempting to come up with therapeutic solutions. Some of these are based on clinical experience already gathered in other countries. At this point, Hydroxychloroquine is one of the agents of great interest.

The modern drug is a derivative of a constituent of the bark of the Cinchona plant, which was taken as an herbal remedy by indigenous Peruvians four centuries ago to treat fever. It is a medication that has traditionally been used against malaria but also has well-proven immunomodulatory properties. For years, this medication has been on hand for the treatment of the autoimmune arthritic type of conditions such as rheumatoid arthritis and systemic lupus erythematosus (that have nothing to do with malaria or any other infectious condition as such).

For the past fifteen years, the premise involving Hydroxychloroquine is that it could be effective against coronavirus infections and found to have definite effectiveness. Hydroxychloroquine is remarkably well-tolerated, especially for short term use, as it would be as applied in the fight against COVID-19. It has been used successfully in both China and Australia. It is now on the drawing board for potential treatment protocols even in the U.S. Note we are referring to Hydroxychloroquine and not Chloroquine itself, a drug with considerably more side effects.

How Does It Work?

Hydroxychloraquine appears to have several mechanisms of action. It seems to be an immunomodulator suppressing the malignant hyperactivation of the immune system resulting from certain viral infections. It also interferes with the virus’s ability to replicate, in two different ways. First, it works through channels in the cell membrane that the virus uses to enter the cell and seems to block access to those channels. The drug also prevents SARS-CoV from plugging into a receptor called angiotensin-converting enzyme 2, or ACE2. When the virus inserts its spike protein into the ACE2 receptor, it sets off a chemical process that alters the structure of the receptor and allows the virus to infect. An adequate dose of Hydroxychloroquine appears to undermine this process, and in turn, viral replication in general.

However, Hydroxychloroquine is not an approved and tested therapeutic in humans. The U.S. Food and Drug Administration (FDA) this week stated that this drug is not on the approved list as treatments for COVID-19. The drug is approved to treat malaria, lupus, and rheumatoid arthritis, but assessment and testing in the framework of COVID-19 are still necessary.

Of course, like any medication, this drug has side effects and should be prescribed by a knowledgeable physician. The side effects are to a large extent benign with the more serious concern about damage to the retina in the eye not of concern in a short term course. Many patients with rheumatoid arthritis are readily started on a regimen of 400 mg twice a day and remain on that dosage for years. The COVID 9 protocol is a 7-day course. 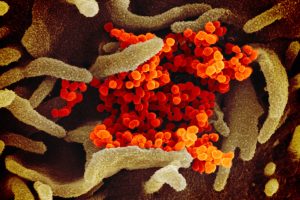 Testing and Effectiveness in the United States

At present, the FDA is organizing a large clinical trial to assess the drug’s effects formally. FDA Commissioner Dr. Stephen M. Hahn (who spoke at a recent White House briefing), has noted that this trial to assess the drug’s effects was made at the request of U.S. President Donald Trump, but that caution must be utilized; that no promises can be made; and trials must be completed just like all FDA approved drugs.

Still, reports of successful informal trials are surfacing rapidly. For example, a medical doctor in New York state has announced that he has treated 350 people with COVID-19 with a one-week course of Hydroxychloroquine, azithromycin, and zinc, with a remarkable success rate and minimal side effects. Dr. Vladimir (Zev) Zelenko of Monroe New York has indicated in a public letter that his treatment plan has resulted in zero deaths, hospitalizations, and intubations. Adverse side effects reported in his trial are almost non-existent, other than approximately 10% of patients showing temporary nausea and diarrhea. Based on his treatment success, Zelenko is recommending initiation of treatment in an outpatient setting. He notes that in his experience, such treatment prevents acute respiratory distress syndrome (ARDS), avoids the need for hospitalization, and ultimately saves lives.

It is interesting to note that researchers at the University of Minnesota have embarked on a study including 1,500 people to probe the drug’s effectiveness further in preventing the development of COVID-19 after people are exposed to SARS-CoV-2. The trial is open to an enrollment of healthcare workers or household contacts nationwide from across the United States, and researchers are hoping to have results within a matter of weeks.

Preliminary reports from China, South Korea, and France suggest that the treatment is at least somewhat effective in treating human patients. For example, Chinese researchers report randomized trials in humans to indicate promising data. In France, results from a small study of 24 patients suggest that Hydroxychloroquine could quicken recovery. Doctors said 25% of patients who received the drug tested positive for the virus after six days, compared with 90% of those who did not receive it.

Another study in France published this week in the International Journal of Antimicrobial Agents described the treatment of 42 patients hospitalized with COVID-19, 26 of who received Hydroxychloroquine, and 16 of whom received routine care. Of the 20 patients who took the antimalarial and completed the study, six also received the antibiotic azithromycin. All six of these patients were free of SARS-CoV-2 by the fifth-day post-treatment, while seven of 14 patients who took Hydroxychloroquine alone were negative for the virus, and two of 16 control patients were no longer infected.

Finally, Hydroxychloroquine is among the four treatments tested in an international “mega” clinical trial, announced on Wednesday by the World Health Organization (WHO), and the U.K. has added Hydroxychloroquine to its list of medicines under export controls. This study is referred to as SOLIDARITY. Overall, more extensive clinical trials will be necessary to determine how effective the drug is.

What About Accessibility? Good News and Bad News

Now for the bad news. According to the American Society of Health-System Pharmacists, Hydroxychloroquine has been in short supply since earlier this month.

Fortunately, however, Israeli generic drug giant Teva has announced that it will provide ten million doses of Hydroxychloroquine to U.S. hospitals free of charge. Additionally, the pharmaceutical company Bayer donated three million tablets to the federal government, and Novartis, Mylan, and Teva are moving to follow suit.

Doctors in the U.S. have wide latitude to prescribe drugs “off-label,” meaning for conditions beyond their initial FDA approval. Doctors still have the liberty to mandate it in view for this purpose, given the fact that it has a good chance of at least improving the condition.

And this just in: The FDA is on the cusp of designating the drug for Expanded Access, or “compassionate use,” to address the novel coronavirus (COVID-19) pandemic, according to FDA Commissioner Stephen Hahn, MD, and President Donald Trump (Coronavirus Task Force. White House Press Conference. Presented: March 19, 2020. Accessed March 19, 2020.) Expanded Access allows patients with severe or life-threatening cases of the virus to have access to them as investigational medicinal products, in the framework of “compassionate use.”

Hydroxychloroquine holds excellent potential in at least decreasing the intensity of the progression of this disease. While we don’t have all the information we need yet to consider this a 100% effective treatment, we are not taking much of a risk in allowing patients access to this course of treatment. The risk is minimal, the potential benefit now unmeasurable.

It certainly looks like the risk versus benefit ratio is rapidly tipping toward benefit. The risk of not giving this medication a chance vastly outweighs the risk of causing any side effects, especially since this drug is generally well-tolerated, especially for a short course. As a physician, I would highly recommend giving any patient with COVID 19 the chance to benefit from it.